by Hannah on January 27, 2015 in Kensington, Uncategorized • 0 Comments

Last month I gave each of the makers at Kensington a 6″ piece of 2×2 and presented them with the challenge of making it into a moving car that could be propelled forward by the wind from our box fan. I did not have an example made already and I didn’t actually know how to make the best design. So we had to tinker together to find some solutions.

We started by finding things in the room that could be used as wheels. Some makers found actual toy car wheels that were left behind from a kit but most students settled on old play dough lids and plastic checkers. The makers found round pencils to use as axels. We used our drill to make holes in the wood to insert the axles. This presented another challenge; the drilled holes were too small to fit the pencils. Some makers chose to use skewers that have a smaller diameter then pencils while others found new ways of attaching the axels that still allowed them to spin. 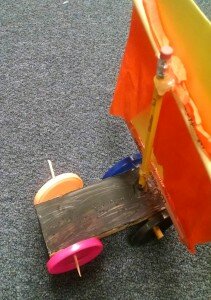 Next we had to figure out how to make a sail that would catch wind. I found that once one maker came up with a design most of the others followed her lead. But when we began to test the designs in front of the fan the makers started to try new ways of catching more wind or changing the way the wheels spun to increase the distance their car could travel. 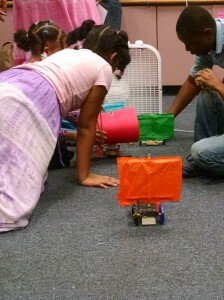 We left the fan set up for several days to encourage makers to re-design and build newer and better cars. One girl came in, saw the cars that had been created the day before, and began making one on her own. She followed the designs that others had used but added a few improvements and took her time. Her car ended up going almost twice as far as the ones made the day before. I am hoping this helps teach the makers to both share design ideas and be persistent in designing and redesigning the things they make. It can be frustrating when there is no clear way to make something “right” but figuring out how to work through this frustration is one of the most important lessons we can learn.