Sustainability is a huge part of Maker Jawn, whether it’s an overt value or not. This past month at the Rodriguez library, I’ve started to notice just how often it is our projects center on repurposed materials, and the role that certain individuals in the community play into that value. Whether it’s the kind elderly woman that drops off old cereal boxes or a librarian collecting yarn and scarves to send to the basement, we have support from the community and an awareness of our need for materials.

One of our projects this month arose from this web of gathering. After many requests for boxes with our supply running low, I went downstairs to get more cardboard and brought up several enormous furniture boxes which I later discovered had been collected by Abe, a long-time patron of the library. While the cardboard had seemed small in the vast basement, our Makerspace was dwarfed by its size. While some people focused on cutting the immense sheets down to what I had considered a “usable” size, other kids immediately seized the opportunity to build a cardboard fort. 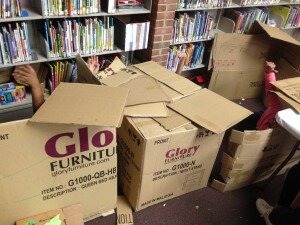 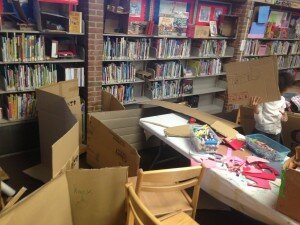 Later dubbed 24 Butt Street, the elaborate fort was built a rebuilt over the course of the next few weeks. I think it was fun for the younger kids to create something more experiential, physical, and all-encompassing rather than the usual miniature dollhouse sculptures. Forts provide security, a sense of personal space, and of course, a sense of pride. 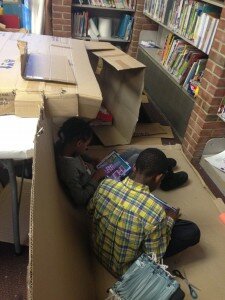 I find it fascinating the way that we label certain materials as “used” so they become trash, when actually some things can be used again and again, even before they are recycled, expanding the life of the stuff and the stories that it’s a part of. When I get the urge to trash perfectly good pipe cleaners or foam pieces just because they’re what’s left over on the table after projects are completed, I scoop them into our manila envelopes labelled “Sculpture Challenge”—an innovation of Lauren, a previous Maker Mentor at Rodriguez—and I take a moment to think about what else they will be used for.