The Kensington Library is host to a new “cooking show” made by the library’s makers and sponsored by a Curiosity Creates grant from the Association for Library Service to Children, made possible through a generous donation by Disney.

In our “KEN Cooks” program we are focusing on cooking recipes made from fresh local food. We started this program in November which means fresh and local produce is limited to root vegetable, squash, and other storable fruits and veggies. 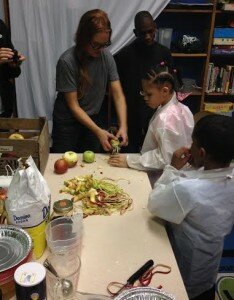 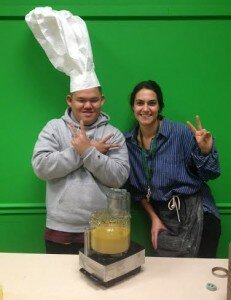 We first tackled making pies from scratch, no pre-made crust, no canned ingredients. We made both pumpkin and apple pie. I had never made pumpkin pie from scratch and quickly found out from asking around that squashes make better pie then pumpkins. We used a large ugly squash called a blue hubbard squash to make the “pumpkin” puree. The pie we made was honestly the best pumpkin pie I’ve ever had!

While we cooked local artist Andrew Jeffrey Wright filmed and documented the process. Young makers made music and artwork for the video. You can watch the resulting cooking show here. Be sure to watch until the end to find out where our food came from!

In December we invited a food and garden educator, Marian, from Norris Square Neighborhood Project to come teach us how to make lip balm from healing herbs that grew right around the corner from our library. She brought calendula flowers, chickweed, and comfrey with her and we made super suave lip balm for everyone to take home. Andrew helped us make Episode 2: Lip Balm Factory. You can watch it here to make your own lip balm at home!

We have made some more tasty foods and have put all our recipes together into a cookbook. Check back in later for more videos and pictures of our cookbook!