Making Maker Dreams Come True, or, Applying for a Grant with a 9-year-old 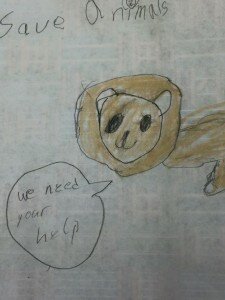 Yesterday Charity and I finished and submited her application for a Disney Friends for Change Grant. We had been working together over the past month to develop ideas for a small grant and ways to apply them through our Maker space in Kensington Library. After having an animal rights activist come speak at the library this summer, Charity has been completely inspired and has started her own animal rights club at the library called Power to the Animals: A Club for Kids Who Care at Kensington Library. The focus has been primarily on exotic animals in other parts of the world, or being abused in zoos and circuses, but since this was a community-based grant, I worked with Charity to talk about the ways we could help the animals in our own back yards.

Since the money can’t be used to donate to another organization, such as an animal shelter, we decided that we could use the money as a tool to raise awareness for animals in the neighborhood. We decided to embark on a poster campaign. Using simplified screen prints, her proposal was to place these kid-designed posters all over the neighborhood – at stop signs, by subways stops, in businesses and anywhere else we could think of! These posters would speak to the need to spay and neuter house pets, to keep our streets cleaner to prevent trash runoff that harms wildlife, to get pets microchipped, and to call city hotlines if you know an animal is being abused. The grant money would allow us to take all these posters and to self-publish them in books, which we would then submit to go in to circulation at all the Philadelphia Free Library Branches, so that the message could live on in the libraries for generations to come!

I think it means a lot more for these important messages to come from the youngest members of our communities. Though we see posters all the time for hotline numbers and lost dogs and cats, it seems especially meaningful that young kids have taken their spare time not to play games, but to tell us adults about the problems we are causing in the world and that they’d like us to change and are willing to work hard for it.

I am so incredibly proud of Charity for her thoughtfulness, her hours spent researching and looking up the hard statistics for animal shelters, writing a budget, and taking political and artistic action for an issue that means a lot and could have a significant impact on our community. Even if we don’t get the grant, this was a great learning experience about how you can make changes in your community even when you don’t have a lot of resources, and those resources are out there if you look for them and work hard.

← Jason and The Makers
Presenting Design Concepts to Youth →

1 comment for “Making Maker Dreams Come True, or, Applying for a Grant with a 9-year-old”