Forts, Animation and Mother’s Day Cards at Cecil B. Moore

This week over at Cecil B. Moore was quite eventful. On Monday, the kids were introduced to art of video making and were quite excited about it. To get the ball rolling, the kids were asked what movies they were a fan of. The overall response was scary movies so the kids will be working on a suspense movie where strange, unexplainable things start occurring throughout the library with guest artists.

Keeping things exciting on Tuesday, we began laying the foundation for our big project, the underwater sea fort accompanied by a life-size book which will be written and illustrated by the kids. Joanna developed the idea for the fort and configured a cool, inexpensive way for the fort to be built. The fort will be made out of cardboard and will feature handmade characters and props (made of clay, play-doh and paper mache), copper light circuits and painted underwater landscapes. I was a little nervous about introducing the idea of getting the kids to write a story themed around the fort. Turned out that the kids were super excited about the idea and were completely engrossed with coming up with characters, settings and an amazingly detailed plot along with the title, The Journey to the Overworld. SUCCESS! Joanna and I would switched the groups of kids around so they would get the total experience of constructing the fort and writing the story. It was an awesome day all around.

On Wednesday, guest artist, Abbey, came in and introduced the kids as well as myself to animation and claymation by using an app on the iPad called iStopMotion. It was quite slow for the 30-40 minutes because there is usually no Makers working at Cecil B. on Wednesdays so the kids didn’t know we were there. Once they started coming in, the energy in the room definitely picked up. Some of the kids were a little apprehensive because weren’t necessarily sure what animation was. Abbey swooped in and saved day by having plenty of video examples to show the kids. Joanna even showed us a very cool video by the White Stripes using Stop Motion technology. We even showed them an a quick video we made with teens from the LEAP program who also work at Cecil B. The kids were hooked and used the play doh and even themselves to make really cool stop motion videos. I can’t wait to see what we do next Wednesday! 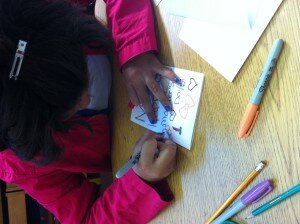 In the spirit of Mother’s day, we made Mother’s Day cards on Thursday. The kids were super excited about this and really went all out with their drawings. I assisted with the poem writing and Joanna stepped in with illustrations. Some of the kids were trying to get us to do all the work for them but Joanna and I stood firm and coached them into working independently. The results were great. I’m sure there will be plenty of happy mothers.

All in all the week was very productive week and fun for all!

← Maker Jawn webinar on 5/14 11am EST: Youth projects, sharing, and documentation
For the Love of Moms! Mother’s Day Presents at Marrero →