The first month at Central was fantastic! We partook in plenty of activities including cardboard arcade games, decorations, slingshots, pumpkin carving, paper circuits, and photography. 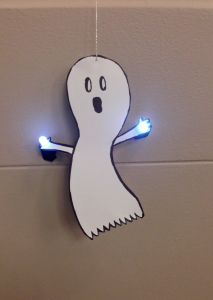 The first week, we joined thousands of makers across the country in the Caine’s Arcade Global Cardboard Challenge. The first cardboard arcade game we built was the Philadelphia BBall Slammer. We modeled it after the Basketball Arcade games where the hoops move back and forth. Next we made a cardboard fortune telling robot. The robot had puppet-like hands and a fortune deciding pinwheel on the back. After that we moved on to making cardboard bumper carts to bump and battle with. 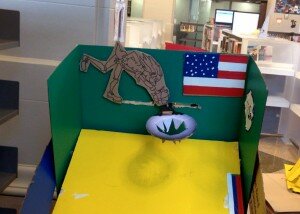 We then moved onto playing with LED’s and paper circuits. We made plenty of spooky Halloween decorations including ghosts, ghouls, pumpkins and more. We hung our decorations around Philbrick hall, so make sure to stop by and see them! 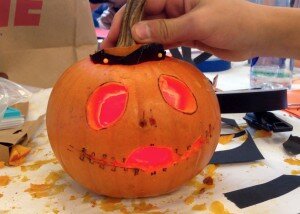 ← Save the Date: Next Maker Celebration at the Free Library on December 14th!
Maker at the Central Branch →