Maker at the Central Branch

The last couple of weeks have been very fun at the Free Library. Here’s an overview of all the cool stuff we’ve done so far at Central!

Our first task was to get kids to play with cardboard and build their favorite arcade games. We got the idea from the video Caine’s Arcade. If you haven’t seen it yet, definitely take a look! It’s about a 9 year old kid who decided to build his own arcade out of cardboard. We thought it would be a great idea for the kids to also try to build stuff with readily available material. This is what one student, Eric, came up with.

First, we have the robot fortune teller! Basically, all you have to do is spin the wheel at the front of the robot, which is connected to a wheel in the back. The person at the back of the wheel will then read your fortune. If you ever stop by the Free Library, do give it a try. Only 5 cents per round and, according to Eric, it’s very accurate. 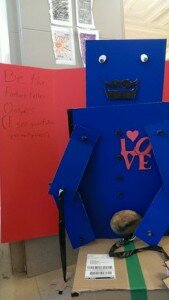 We learned a lot about physics and the mechanics of putting pieces of cardboard together. It definitely took a lot of time and creativity, but I think Eric did a swell job of putting everything together. 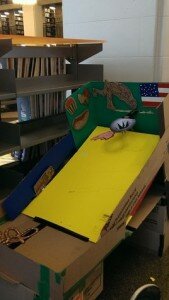 The second cardboard game Eric came up with was a basketball arcade game. This was hard because there were so many pieces of cardboard involved and we really needed to get the proportions right for it to stand up. The following is a picture of the basketball hoop, when it was still standing. Eric really wanted to make the game Philly-related so we put a bunch of Philly decorations (ie, Philly Cheesesteak, the Eagles). And yes, that is Ben Franklin dunking a basketball.

Last Friday, the Central Free Library team  experimented with LED lights. Unfortunately, that day was pouring rain and few teens showed up to the library. That was ok though because we took the time to learn how to attach LED lights to everything. I definitely had a little too much fun and this is what resulted: 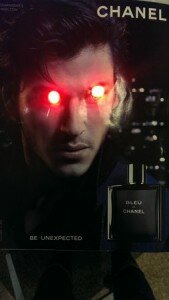 Pretty unexpected, huh? We will be using these LED lights for future projects with the kids.

This week, the central branch invited Claymobile to come and do a claymation demonstration. Basically, the kids got to play with clay and create really cool animations.

This is Claymobile doing the demonstration: 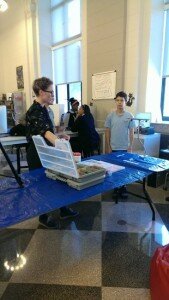 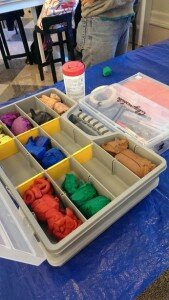 We used blue tarp as the background. Then we captured clay movement in tiny increments via dozens of pictures on an iPad. The result is a very cool clay animation. You can see us hard at work taking shots of multiple frames. 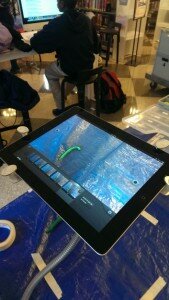 Stay tuned for next week!