Community-Embedded Design: Connected Messages at the Free Library of Philadelphia

by kfaisteele on September 25, 2013 in connected messages, MakerJawn, Uncategorized • 0 Comments 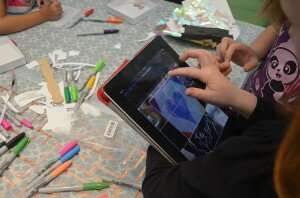 Connected Messages is a maker initiative funded by a Project:Connect grant, and developed by the Free Library of Philadelphia and the University of Pennsylvania’s Graduate School of Education and School of Design (eCrafting.org). It was implemented in five library locations across Philadelphia during the summer of 2013. The goal was to introduce youth to electronics and technology through the lens of art and community dialogue. We built Connected Messages on existing programming through the Maker Education Initiative, where five near-peer Maker Mentors engaged youth in daily workshops at five underserved community libraries. This amazing opportunity through Project:Connect has served as a stepping-stone in terms of how libraries can participate in the maker movement and connect technology to youth in a transformative, personal way.

With this project, we wanted to knit together all five Maker sites at the Free Library of Philadelphia this summer, both physically and digitally, and create a way to blend technology, community and literacy with the youth we reach on a daily basis. We needed a project that 1) would be easy to execute, in terms of low-cost materials 2) could be developed and completed in six weeks 3) would be relevant and interesting to youth and 4) would have an interactive component, and could also exist digitally as a way to share with a wider audience outside of the community.

There are two elements to the project: the physical mural and the web interface. Each physical mural was made out of a piece of 4 ft x 4 ft foamcore, on which we laid down a grid of copper tape. This created a DIY circuit board, which allowed for 64 individual units – these are the boxes (one can also think of them as “quilt squares”) that each youth makes individually to create the larger mural. The youth decorates the top of the box, then assembles the circuit on the bottom of the box. 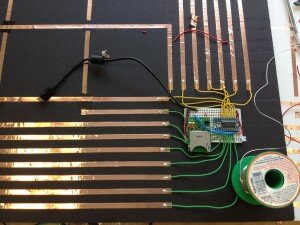 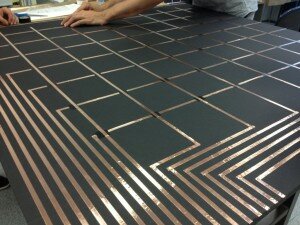 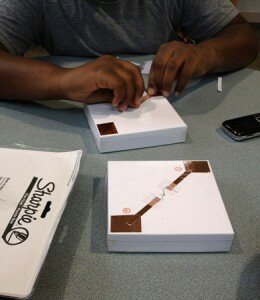 Each box contains one LED, which the youth connected to the circuit board through pushpins and copper tape. Each mural is connected to the internet through an Electric Imp, a device that makes it easy to connect hardware to the internet. Each of the walls has its own webpage on connected.ecrafting.org where anyone can see the boxes that youth have made, read more/watch a youth-produced video about the creator and the ideas behind each box, control which boxes are lit up by clicking buttons on the page, and send messages to the mural. This gave youth the opportunity to not only control and send messages to their board, but to play with and send messages to youth at the other sites. 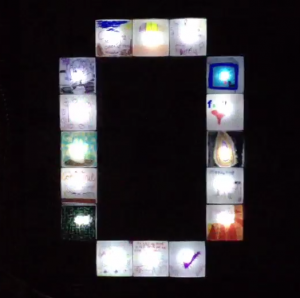 [VIDEO] A message through Connected Messages 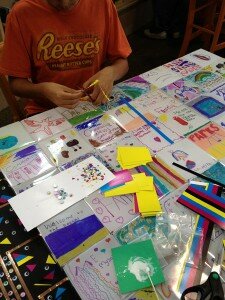 The idea behind the project was to draw on Philadelphia’s long history of murals and communal art-building as restorative to broken communities. When asked to talk about their neighborhood, several youth from the McPherson Square library said, “no good” “[I] stay inside and watch tv”. McPherson Square is in the Kensington neighborhood, an area of the city with a reputation for drugs and violence (the library branch itself sits atop a hill that’s known by Philadelphians as “needle park”). Part of the concept behind Connected Messages is asset-based community development: we wanted the youth to focus on the positive things about their community, and the things they love and care about. This enabled them to take ownership over their participation in the project. Soon, many youth were writing messages about their families, going to the pool, and spending time with their maker mentors. Several youth created multiple boxes and became ad-hoc mentors to their own friends as they approached the project. What began as a discussion about violence turned into an active example of the City of Brotherly Love and Sisterly Affection, and a sharing of positive messages. 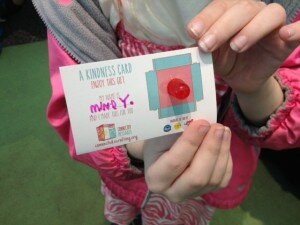 Because each youth was contributing their box to the larger project, we wanted to make sure they had something to leave the project with. We developed “kindness cards” as giveaways. Kindness cards are a simple foldable business card kit that includes an LED, coin cell battery, and tape. The youth is shown how to assemble the card so that the LED lights when the card is closed. They are encouraged to write their name on the outside of the card, then give the card to a friend or family member.

Connected Messages culminated in a public “Maker Celebration” on August 17, 2013. Youth who participated in maker programming at the Free Library joined together with adults and youth media organizations across Philadelphia to share their projects with each other in the lobby of the Parkway Central library. Over 200 people registered and were in attendance for the event. A group of youth led workshops in creating kindness cards and Connected Messages boxes with attendees. 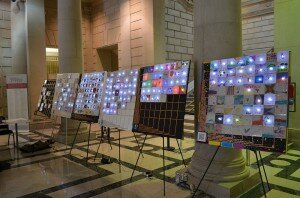 All five Connected Messages murals together

Our team most recently travelled to Maker Faire NY 2013 to exhibit Connected Messages. We had youth and families create a sixth mural, as well as hundreds of kindness cards for distribution throughout the Faire. We received both the Editor’s Choice Award and the Educator’s Choice Award. 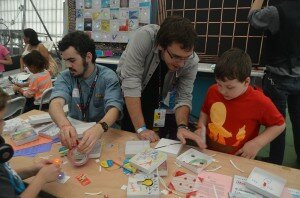 We plan to offer Connected Messages this fall at our Central Library and Kensington Neighborhood Library, with some improvements to the design, some more time for implementation and dialogue, and the opportunity to introduce youth to more steps of the process (e.g., soldering and web design). We are really looking forward to developing more projects as a result of what we learned with Connected Messages, and are thrilled to have been part of such an active national network of makers and thinkers this summer through HASTAC. 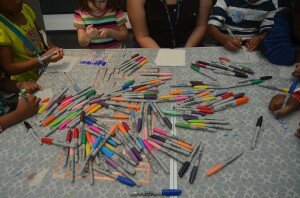 Connected Messages would not have been possible without the dedication of our Maker Corps Mentors: Brandon Klevnce, Brittany Walker, Ryan Barnes, Drew Zangerle, and May Moc; and our partners at the University of Pennsylvania: Dr. Yasmin Kafai, Dr. Orkan Telhan, Richard Lee Davis, Amanda Suarez, Thuy Le, and Becca Hallec.

← What does Connected Messages look like in the dark?
Save the Date: Next Maker Celebration at the Free Library on December 14th! →