6/11/2013 was my first day at the Widener Branch. There was another program called the “Leap” running at the same time I was supposed to do my activity. I’ve worked with other Leap members but I’m usually helping them with their activities instead of trying to take kids away from their program. So the first 30 minutes since I started my program it felt like it was a competition to get more kids to participate. Then I was introduced to the Leap program member and she welcomed me to the library. Instead of being on the floor with the books around me I was able to share the meeting room. And together

My first activity that I did with the kids was the bubbling lava lamp. This activity is relatively easy it just a little mess if it gets out of hand. A good alternative lava lamp would be from Science Bob (http://www.sciencebob.com/experiments/lavalamp.php). But I’m going to describe a little of what I did. 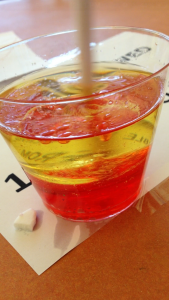 The objective of this activity is to learn the meaning of density and intermolecular forces (please look at the science bob for a clearer explanation). This activity allows the children to see that because of density water and oil does not mix because they consist of different density and therefore when the mixture is stirred it doesn’t mix.

In this activity I had about 10 kids. I ran about of materials after the 8th kid. I only bought one bottle of oil and it was used up completely. So for this activity I would consider to have doubled the amount of oil for the next time I do this project. I would consider using a bottle instead of a cup. After an hour the kids started to get to quickly stir the mixture and it got on the table and it was a bigger mess to clean. OH! Another thing to be aware is that once you give the kids food coloring to put a drop or two in, they would squirt the whole entire bottle. I thought this activity was a huge success for my first day. The items are relativity cheap to purchase.