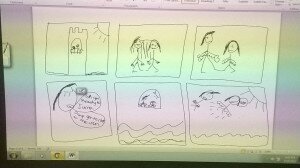 The kids at Widener have been working on a Godfather inspired film script called Godbrothers. The narrative is long and winding and although the script itself is still under construction, we’ve decided to work on producing short episodes, taking it one scene at a time.

Scene One was ready for pre-production, so yesterday we learned about different shot types and began storyboarding. The kids drew examples of a close up, a medium shot, and a long shot on the smart board and then we watched some film trailers of their choosing and identified the different shots in action.

Once that was all making sense to everyone, we worked on a collaborative storyboard about the Icarus myth (a story proposed by one of the students). Then each student created their own storyboard on the smartboard or on paper and finally we began work on the Godbrothers Scene One storyboard!

← Making Stuff Safer at Kensington
Improvisation Leads to Discovery at Cecil B. Moore →