Guards get involved in making – a story from Lillian Marrero Library

A group of three teens walked in. They all kind of looked at the green screen, but immediately headed for the computers to play Roblox. I could tell that one of the teens, Keyon, was really intrigued with the green screen, so I began to adjust the height of the screen and motioned him to come check it out.

“What is it?” he asked, before leaving his chair.

“It’s a green screen,” I told him, “Kind of like what the weatherman uses. You can use it to mix photos into other photos.”

He got up, walked over and began to inquire further. “So how does it work?”

I showed him the basics of how it worked using some example photos. I showed him how to find backgrounds using Google and then how to load and edit the photos using the site PIXLR.com. While he was learning to edit, one of the guards had come over to check it out, also.

“That’s crazy!” Keyon exclaimed. “How do you get the pictures off of the camera?”

I explained the process and then he asked the guard if he could be in one of the pictures. The guard was very enthusiastic and after many takes, ended up being in several of the pictures. It was cool to watch Keyon give the guard directions about what would work best for framing his photo. It was also cool to see how much the guard listened to Keyon and really became involved in the program. Afterwards, Keyon employed the skills he’d just picked up and helped the guard find a photo, online.

“That’s the one, right there…with the skull!” said the guard. Keyon grabbed the photos and went to work. He even explained to the guard what he was doing as he was doing it.

The guard looked on in amazement as Keyon removed the green and added in the skull background.

“Get out of here! Look at that! Boy you are talented.” he said. He called over some of the other staff, so that they could see what was happening. “I took that picture in front of the screen, and then he put me in this picture.”

Keyon ended up showing a few of his friends how to use PIXLR and edited some more photos, before it was time to end for the day. He seemed very excited to mess around with the green screen again and helped to take the screen down. It was great to see this instance of intergenerational learning and literally watch the level of empowerment and community building that took place. 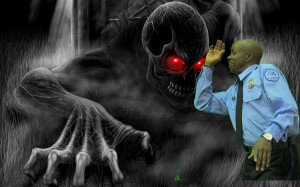