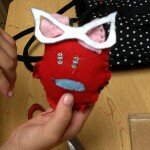 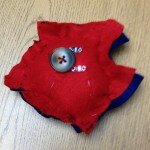 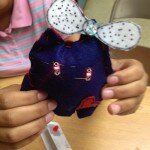 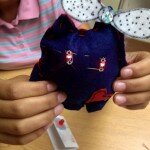 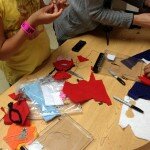 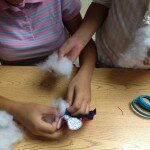 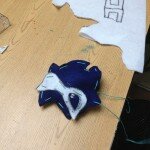 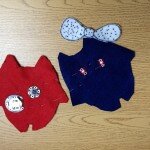 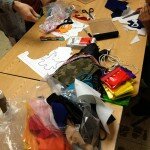 After several weeks of one hour sessions working with e-textiles we finally got it all finished up.

In the beginning we were concerned about only have enough materials for ten kids to participate in this project. A sign-up sheet was put out and filled up pretty quickly. Week after week, though, we saw the numbers dwindle and dwindle. This drop-off in participation was not for lack of enthusiasm for e-textiles, but for simple enthusiasm for summer and a child’s desire to be un-constrained by schedules and routine. I remember my own grade-school summers when forgetting what day it was was par for the course (save for Saturday mornings…Cartoon time!).

But in the end, the ones who stuck it out got to see their creations come to stuffy life. From the start it seemed as if the steps for each week were almost painfully slow and simplistic, but then when we got started it became very evident to me that these steps were very much necessary.

Some of the steps seemed a little counter-intuitive or perhaps more complicated than need be. Whether they are or not I haven’t quite decided even after everything has been completed. The steps were to basically first get the circuit completed and stitched on to the felt front and back of the creature before stuffing it. This would have the conductive thread stitched across the surface of the creature. Doing it this way makes it easier to see just how the circuit works for the creator as well as to others who want to know just how it works. But on an aesthetic level I thought it would have been better to stitch the front and back together and stuff it first. Then have the conductive thread go directly through the middle of the creature, in effect hiding the conductive thread. That’s the way that I put mine together, but I have a lot of experience making stuffed animal-things so doing this was pretty straight forward to me. I got the impression that if the conductive threads were hidden within the creatures the kids would have quickly become confused about just how the circuit is working.

In the end, whether the stuffed monsters were functional or not, it came down to creating accessories for the creatures to wear. With a real and clear objective for the projects (creating a stuffed animal with light up eyes) sitting down and working toward that end appeared to be seen as real work for the kids participating. But when they were able to invent accessories and personalize their creations it felt less like work and a lot more like fun, independent creation.