Maker Jawn and the City

One of my favorite things about working for Maker Jawn and the Free Library of Philadelphia is the geographic diversity of our program. Since November of 2013 I’ve worked at the Central Branch, Kensington, Cecil B. Moore, Cobbs Creek/Blanche Nixon, Joseph E. Coleman and Paschalville in some capacity of the Jawn, but I’ve never really thought about just how much area we cover. As time permits I will revisit this spatial data. For now though, I want to reflect on the size of our program. 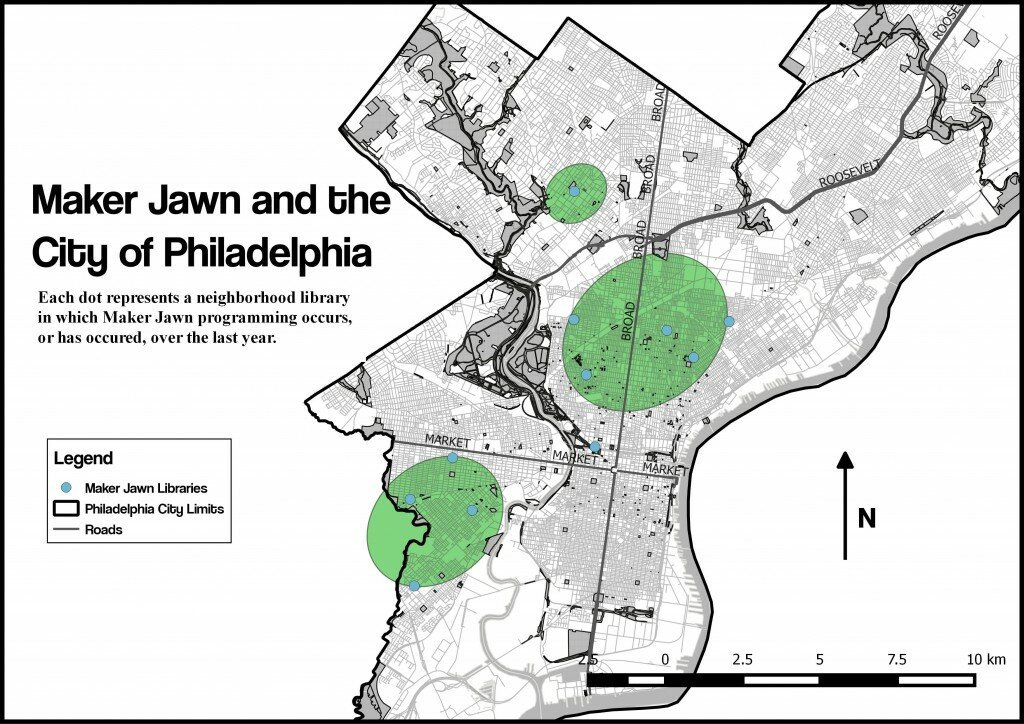 Not too long ago Maker Jawn was hunkered down in the Kensington Neighborhood Library and the staff consisted of a handful of administrators and a few volunteers. A year later we have grown by leaps and bounds. Kensington proved to be the perfect starting point for Maker Jawn (thanks to a lovely staff and wonderful patrons) and through the lessons learned just off the York-Dauphin El stop, we’ve been able to expand to hold programming in nearly 10 different neighborhood libraries at some point in time. From 70th and Woodland to 6th and Indiana we’ve had Mentors having fun and going nuts weekly.

The important part of all this is not to congratulate ourselves on an awesome job, but rather to visualize what impact we could have on the community at large. Looking at the map it’s easy to see that even though Philadelphia is a city of 1.5 million people, it’s not that big of town — our little program has covered a lot of the city and we’ve only been active in about 20% of all Free Library libraries.

What I think is even more exciting about this visualization is when we think about the role of the library in specific communities. Each neighborhood library serves as a hub of sorts, a mini-city in its own right. Patrons come into their local libraries each day and catch up on the week’s events or chat with their neighbors for some time. And, just as each library has their own routine, each library has their own needs. This is perfect for Maker Jawn because the concept of creating does not lend itself to pre-planned programming. Having the ability to remain flexible in our activities is wonderful not only from an artist/creator standpoint, but also as a public service because because what works in Cecil B. Moore might fail in Paschalville and to be able to address each community’s needs and desires so freely is, well, unbelievable.

So, here Maker Jawn is, hanging out with kids and introducing them to awesome things like video production, story telling and e-textiles, but looking at this map helped me see it our position in the community more clearly: it’s not just students living in our sphere of influence. There are mothers and fathers, grandparents and eligible bachelors all living alongside one another and they all use the library and we interact with them daily!

The next year of Maker Jawn will be fun, and I can’t wait to see what our staff comes up with to expand maker programming to reach citizens of all ages!

4 comments for “Maker Jawn and the City”